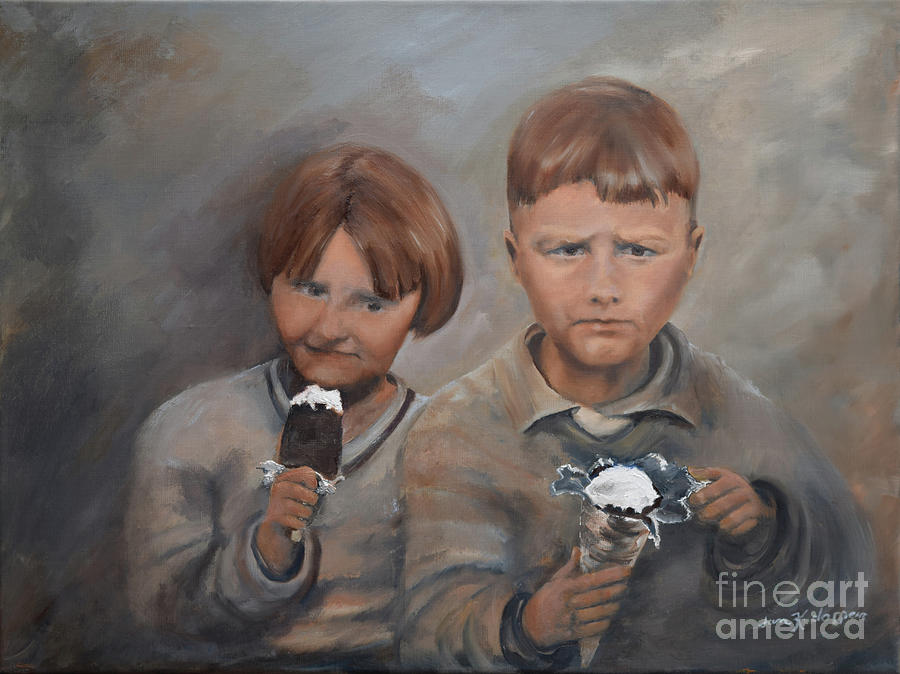 This piece has been already sold.   Please feel free to contact the artist directly regarding this or other pieces.

This is a 24 x 18 oil painting of my Mother and Uncle Willie, her brother. The photo I used as a reference was taking around the early 1930s, during the Depression. Ice Cream was a rare treat for my mother and her brother. Their mother died when my mother was two and Willie was five. They were moved from place to place, first with their father and different wives, then their Grandmother's home and once my mother was taken to an orphanage for a couple of years. My mother remembers her brother as taking care of her when they were left alone. He would build a fire, keep it going, climb up on a stool and cook her an egg when they were hungry. They would slide into bed and snuggle to stay warm. Willie would lay his leg over hers to assure her that nobody would take her during the night. She followed him wherever he went...across the bridge over the Chattahoochee River, across the train trestles and many places they were not allowed to go. Of course, no one usually found out, because most of the time, no one paid any attention. They were too busy just trying to put food on the table. My mother will be 90 this year and I painted this for her for Christmas because this is one of her favorite memories with her brother "Willie". They had been given a nickle, slid under the fence, and went to the fair. It was a Rare Treat.

Congrats on your sale!!

Lovely and adorable as can be. Well done Jan! FAVORITE!

Congratulations on your sale!

Congrats on your sale!

Congrats on your sale

Congrats on your sale!

Congrats on your sale, Jan!

congrats on your wonderful sale!